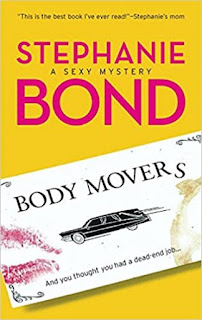 Body Movers by Stephanie Bond
Body Movers is the first book in the Body Movers series by Stephanie Bond. The story takes place in Atlantia, GA and focuses on Carlotta Wren, who is in her later 20’s, and her younger brother, Wesley Wren, recently graduated from school. They were “silver spoon” kids leading the “good life” with unlimited possibilities ahead of them until their parents got caught in a white-collar crime and skipped bail, leaving them to fend for themselves.
Carlotta’s life changed in an instant and her future dreams of a college education evaporated. Instead of starting college in the fall she instead takes a job at Neiman Marcus, determined to create a life for her and Wesley.
Wesley is a good guy but has a gambling problem that puts him and Carlotta in danger with loan sharks and their henchmen who don’t hesitate to visit when they attempt to collect payment.   Wesley tries to make things right and get back on track by taking a job picking up and moving dead bodies. He establishes a mentor /mentee relationship with his boss Coop Craft who tries to help him make good decisions.
The book provides plenty of unexpected, wacky plot twists that range from romance to murder to comedy.
Did you know that there are real life body movers? Check out Mortician Macie’s video on YouTube to learn more about what things are like in a day in the life of a funeral assistant.

Body Movers is categorized as a cozy mystery, which means that it is a light read that allows you to sit back and enjoy without having to do a lot of thinking. With a resourceful, unique female lead with a comedic flair, this series is similar to books written by Janet Evanovich (like her Stephanie Plum series), and Nancy Martin’s Blackbird Sisters Mysteries.
The reviews from readers about Body Movers are all over the board, so you should read it yourself to determine where you think it falls in the 5 star ratings.
***
What’s the most unexpected job you’ve found yourself doing to help support yourself and/or your family?
Posted by Solon Public Library on November 18, 2020 No comments: 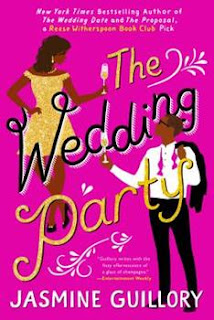 1. Alexa is their best friend.
2. They hate each other.

When Alexa announces she is getting married, her friends Theo and Maddie know they'll end up spending a lot more time together than they would like. Since they'll be sharing bridal party responsibilities, they decide they might as well get together to blow off some steam. That one-night stand turns into a full-fledged secret affair with the kind of ground rules that just don't last. As they spend more time together, they both realize that maybe they don't actually hate each other after all. 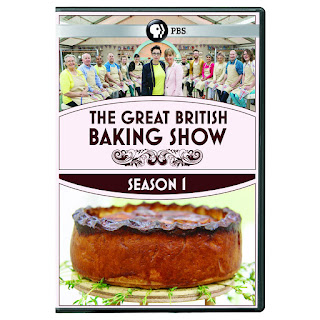 The Great British Baking Show
As they get to know each other better, in addition to discussing her ambitions to grow her business as a personal stylist, Maddie also shares with Theo her guilty pleasures of watching The Great British Baking Show. Together they learn that in Great Britain this show is called The Great British Bake Off, but in the US they had to change the name because Pillsbury owns the trademark for the term "Bake Off." They enjoy watching this show together because it is so wholesome. Even though the contestants are competing against one another, they really want everyone in the tent to be successful in their baking. It's the perfect way to unwind after a stressful day. Dancing with the Stars: Cardio Dance
On the very first night they spend together, Theo impresses Maddie with his secret passion for dancing. When he is home alone he moves the furniture, rolls up the carpet, and perfects his dancing skills in his own living room. At first Maddie laughs at this, but learns to appreciate Theo's passions and guilty pleasures as he does hers.

Full of fun and unexpected connection, The Wedding Party is a great continuation of stories of various romances that spring from the couple we first meet in The Wedding Date. While you don't have to read these books in order to enjoy them, it is definitely fun to see how the threads of each of the characters intertwine throughout the books as the series continues.
***
What do you like to watch when you're home alone, feeling a lack of motivation or just to unwind?
Posted by Solon Public Library on November 11, 2020 No comments: 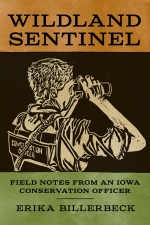 Erika Billerbeck is a local Solon author and Conservation Officer taking us along for the ride in Wildland Sentinel, as she and her colleagues sift through poaching investigations, search for fugitives in wildland areas, patrol the waters at the Coralville Reservoir and Iowa River.

You may be asking yourself, "What exactly is a conservation officer?" or you may already have a general knowledge of different situations a conservation officer would encounter, thanks to Erika’s brilliant writing in her former column “Warden’s Diary” featured in Iowa Outdoors Magazine. In the first chapter of Wildland Sentinel, Erika shares a quote from Nature Noir by Jordan Fisher Smith which summarized a conservation officer’s duties like this:

You protect the land from the people, the people from the land, the people from each other, and the people from themselves. It’s what you are trained to do without even thinking, a reflexive and unconditional act. If you’re lucky, you get assigned to people who seem worth saving and land and waters whose situation is not hopeless. If not, you save them anyway. And maybe in time, saving them will make them worth it.

With Iowa’s public lands a miniscule 2% of the state being utilized by a wide variety of people, a conservation officer spends much of their time managing the people. Whether that happens as Erika plays the “What the hell?” game, to “rolling the cob” with locals, to checking fishing and hunting licenses.

By building on skills of investigation, Erika is able to deduce what a person could be up to, just by playing “What the hell?” as she spies a parked car in a wildlife area. Who would leave a steaming piece of pizza with a single bite out of it on the dash of their car? Why is there an empty compound bow case on the seat of the truck or a tackle box in a back seat?

By relying on people skills and “rolling the cob” Erika and other conservation officers are building rapport with the locals and frequent visitors to these wildlands through the art of small talk. These relationships lead to trust and empower the locals to report suspicious activities, a priceless tool in a conservation officer’s investigation.

With such a small amount of public lands available, and societal demands on people to always be bustling about, many of us have lost touch with nature. Childhood used to be full of creek stomping, exploring the woods, climbing trees, catching frogs, following a wildlife trail, and building hideouts in the woods. A few years ago, Erika saw a need to get children back into the freedom of outdoor play and developed the “Wild Things” program for Solon school kids – bringing the free, wildness of nature back into kids lives. You can learn more about nature's important role in child development in the documentary, "Mother Nature's Child" found for free with your library card on Kanopy. 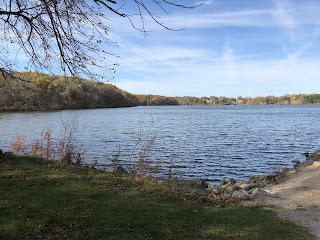 Photo of Lake MacBride taken by librarian Megan Richardson
Johnson County has many beautiful local parks. Places like Lake Macbride State Park, FW Kent Park, hiking & biking trails traverse miles of wilderness, and even landscapes located within cities like our Solon Recreation and Nature Area or Iowa City’s Hickory Hill Park. Whether you’re an avid fisher or hunter, or you just enjoy a stroll down the beautiful trails, you’re taking part in these wild lands that are offered to our community.

How do you become a steward of these lands?  How do you protect and care for these special places to ensure these lands will be here for generations to come?

Posted by Solon Public Library on November 04, 2020 No comments: